I am very impressed by your work – it speaks for itself.  But how did you get the idea for the blind prom project?

I was introduced to the blind community in 2005 when I began working as a stills photographer and field producer on the PBS-funded film, The Eyes of Me, a documentary about four students at the Texas School for the Blind and Visually Impaired. Over the last three years, I have gotten to know many of the students at the school and have attended several events there as a photographer.  When I volunteered to be the prom photographer, it was a pretty natural thing.  I think that the school appreciated having a professional photographer document prom. And, these pictures were made available to share with the students’ parents and friends.
Because I had gotten to know some of the students prior to prom, I already had a relationship with them.  And with the kids I didn’t know, I carried an energy with me that showed I cared and that I was excited for them on their big night.  They all looked great in their tuxes and dresses, and they were excited to have their portraits made.

Personal appearance is an issue for most teenagers.  Did the girls ask you if they were looking good in the pictures?

I agree that most teens are preoccupied with their appearance, and some of the students at the Texas School for the Blind were no different.  But, they all knew that they were looking good in their prom dresses that night.  They also had their hair and make-up done earlier that day, so everyone was feeling pretty confident and special.

How did you control the light? Some pictures look like studio flash, but what about the picture in the bus?

For the prom formal portraits, I used several studio lights, umbrellas, and light modifiers.  For almost all of the remaining images (both indoors and outdoors), I shot with on-camera flash, and I had an assistant carrying an additional flash unit that was synchronized using a remote slave.  The assistant light often served as the main light, creating a more direct spotlight effect. The image on the bus was shot with my on-camera flash only.  My assistant didn’t get to ride with me on the bus.

You lived in New York for a while and then went back to Texas. Did you return for professional reasons?  Was it a great risk for you to return or was it much more difficult to get jobs in New York City?

I grew up in Austin, Texas, but went to New York University right after high school and lived there for about nine years.  I love New York for all of the diverse experiences it can offer, and I still travel there several times a year.  My photography network, my professional knowledge, and my internal drive began in New York, and I still have all of that inside of me.  Three years ago I had an opportunity to move back to Austin temporarily, to work on a project.  I thought I would be here for six months, and now three years have gone by.  Right off the bat, I started getting hired by Texas Monthly, one of the most respected magazines in the world for its writing, design, and photography.  I was also getting calls from national magazines that needed to hire a photographer in the Texas area.  From the current vantage point, I think moving back to Austin was a smart idea for me.  Kind of a bigger fish in a smaller pond scenario….

It seems as though you are privileged to have your personal work and your commercial work be one in the same.  Who are your main clients?  Are they mostly magazines?

I do feel privileged to be hired to photograph subject matter that can be considered my personal work.  Some of this is by design.  I had a teacher back at NYU that stressed a very important point.  He told us to fill our portfolio and website with the work that was meaningful and fulfilling to us, and if we were lucky, clients would hire us to do that kind of work. I took his advice to heart.  My promotional materials only show the work that I am proud of, in hopes that more work like this will come. I have also pitched stories to clients. For instance, the Blind Prom story was published by and supported by Texas Monthly, but I had been photographing for several years at the Texas School for the Blind and Visually Impaired prior to the article being published.  I brought the prom story idea to them and they liked it.
Most of my clients are magazines, but I also have commercial clients.  Some of the work I do is totally different from what you see on my website.  Occasionally we all have to take work that just helps pay the bills.

Well, I will be photographing prom at the school again this April, so I will be getting ready for that.  I will also be working to find more opportunities for the prom story to reach a broader audience.  There is also a slight possibility that I will be joining a disaster response team for the upcoming storm season, as a documentary photographer.  It could be a very exciting and/or dangerous opportunity.  We shall see….. 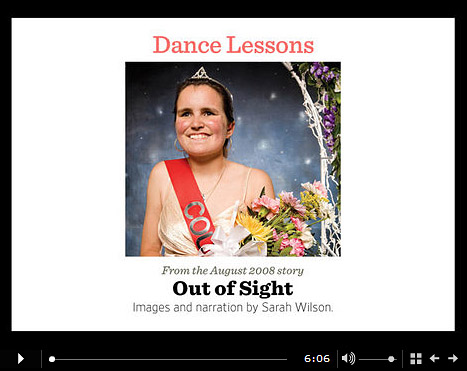